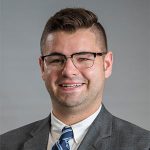 Brian Keester is an associate in Rhodes Hieronymus whose practice focus is commercial litigation and insurance defense.

Brian Keester received his bachelors degree from the University of Oklahoma in 2014 and graduated Cum Laude from the University of Arkansas School of Law in 2017. While attending Arkansas, he was active in the Student Bar Association and was a Student Mentor to incoming and first year Law Students. He was also a member of the Dean’s Honor Roll. Throughout Law School, Brian was a youth soccer coach. He is a Tulsa native. Brian graduated from OU with special academic distinction with a Bachelor of Arts in Political Science. While attending OU, Brian was an OU Boren Award Scholarship Recipient, a member of the Dean’s Honor Roll and also a member of the President’s Honor Roll. Brian was an active member of Big Brothers Big Sisters of Oklahoma, Emerging Leaders, and also a member of Alpha Lambda Delta Honor Fraternity.